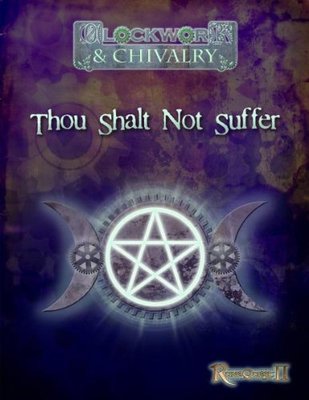 Clockwork and Chivalry Thou Shalt not Suffer

There are those who claim that witches don't exist! They also claim that tales of curses and crop blights, of midnight sabbats and dark conspiracies, are the fevered imaginings of fanatical Witch Finders. Those people have never been to Cornwall.

In that wild and sea-girt land, the Witch Queen rules through sorcery and fear, and the Royalist majority seem to be in thrall to her evil will.

The Adventurers are sent on a mission to this bleak, remote and sinister place, where they must struggle through a maze of witches, wreckers and pirates, miners, fanatics and superstitious peasants, to find the truth behind a growing evil which could swallow up the whole of England.

Thou Shalt Not Suffer can be played as a stand-alone adventure, but also forms the second episode of the epic Kingdom & Commonwealth Campaign for Clockwork & Chivalry. Alongside a complete adventure are new rules for Witchcraft and information on those who practice it.

Requires the RuneQuest II Core Rulebook from Mongoose Publishing and the Clockwork & Chivalry Core Worldbook from Cakebread & Walton and Cubicle 7.